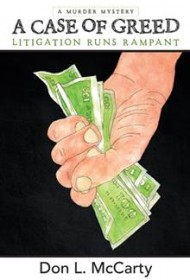 This novel’s subtitle, “Litigation Runs Rampant,” is well-chosen for a murder mystery anchored in the activities of several unscrupulous attorneys. This “Case of Greed” may also be seen as a “can of worms,” as one of the more unsavory legal eagles here calls the mess that his legal team creates.

In this story, honest, upstanding and recently retired lawyer Austin Wells is pressed by Adele Ogden to help her tidy up the affairs of her brother, Franklin “Frankie” Ogden, who has been murdered in Mexico. The lawyer is reluctant to take on a case involving the much-divorced beauty, with whom he had enjoyed a love affair before he saw red flags with her family that caused him to break off the relationship.

But Adele is adept at being a damsel in distress, and Austin is drawn in. In Mexico, he’s not surprised to learn that Frankie had engaged in pedophilia. Then, even before Frankie can be cremated, a trio of San Diego lawyers takes action on the authority of a copy of Frankie’s will that Austin is convinced has been forged. Litigation indeed runs rampant as the legal trio and unfriendly judges block ordinary procedure, and Austin must work with the oily Elroy Snipes, whom he soon learns is a “defective co-counsel.”

That formal, courtroom-style choice of words is typical of this talky book in which the author details not just key conversations but phone calls about incidentals such as dinner reservations. This slows the pace, leaving Austin’s admirable earnestness to advance a plot that is centered on sorting out the will.

The book seems influenced by formulaic mysteries of the mid-20th century and is populated by stock characters, but for one hero lawyer who proves that good is good and bad is truly unsavory. Fans of legal procedural mysteries of that period will likely enjoy this contemporary take on the formula.