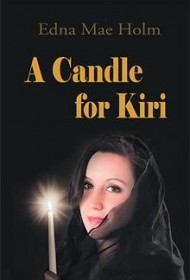 In this well-crafted, entertaining historical romance novel, set in the early 1900s, a young immigrant and her husband leave their native Sweden for America to escape poverty and starvation. Though their physical conditions improve, protagonist Kiri is haunted by doubts and unexplained fears and falls into a forbidden love with disastrous consequences.

The story opens with Kiri conflicted about leaving her farm family to attend high school in a more sophisticated town. Soon after, her parents are killed in a horrifying incident. Meanwhile, Kiri meets handsome tool-and-die apprentice Einar. He convinces her to marry him and move to Wisconsin, where Kiri’s sister and her husband have gone to flee Sweden’s dire war conditions.

The couple builds a family, yet Kiri is unsettled both because Einar seems to care mostly about his work and because she can’t shake the feeling that something horrendous happened to her in the past long before her parents died, something she can’t quite remember. After she unexpectedly falls for young and kind Pastor Hanson, their secret liaison brings new troubles.

Holm’s complex story skillfully weaves together multiple subplots with well-drawn and likable (or sometimes detestable) characters. Interesting historical detail of this time period both in Sweden and the United States brings a surge of life to the tale without overburdening the plot.

The book offers strong foreshadowing as well as apt tension in many dramatic scenes, such as where Kiri grapples with her fears and during a frantic fire evacuation. A minor issue is that the writing is unusually tepid and brief in a significant scene involving a shocking murder, something that merits much more electrifying language and development.

Overall, while this nimble narrative lacks poetic dazzle and could use a rewrite of the murder scene, it’s sure to please a wide audience.