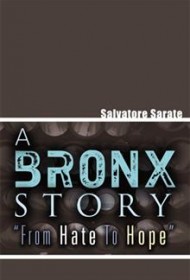 Salvatore Sarate doesn’t have to look to Romeo and Juliet for his Westside Story. He lived a version of it while growing up in the Bronx in the 1930s and ’40s. He was a Depression-era baby born into a hardscrabble life with a brutish father and doting mother and the mean streets of the neighborhood to instruct him. Such is the trajectory of A Bronx Story: From Hate to Hope, a slight autobiography that details Sarate’s transition from common hood to respectable businessman.

Sarate isn’t a wordsmith; he details his life in simple, even visceral terms, creating a sense of time and place that transcends the sometimes-rough syntax. The result is a dramatic story, filled with violence, streets brawls and, yes, prison, the result of a knife fight that left a rival gang member dead. Sarate might have gone back to a life of crime upon being paroled if not for the love of a good woman, the adoption of two sons and a dream of building his own business.

The strength of Sarate’s story isn’t its prose (which contains numerous copyediting errors) but its passion. He doesn’t shy away from his failings as a father and husband, or from detailing how tragedy stalks even those given a measure of success. Cancer, the death of a child – there’s a lot to tug at the heartstrings in this quick read, which charts the tandem arc of a business visionary (Sarate was into data storage before nearly anyone else) and a man trying to atone for past sins while facing domestic demons.

Put Shakespeare’s tragedies and Tony Robbins’ business inspiration into a blender and you get A Bronx Story. Readers willing to overlook its limitations, due to its simple prose and extreme brevity, will find a story that lifts their spirits, despite the heartbreak Sarate endured.