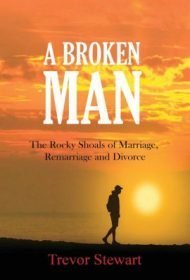 In A Broken Man: The Rocky Shoals of Marriage, Remarriage and Divorce, Trevor Stewart shares a particularly rough period of his personal life in order to help others.

A career soldier in the UK military, Stewart met Sally-Ann while both were married. Exhilarated to have met a soul mate, he divorced his wife and, in 1995, the couple married. He “deserted” (his word) his two children to devote himself to Sally-Ann’s three children, then ages 5, 12, and 15, although he realized the step-children resented him.

Eventually, Pablo, an older boy from his second marriage, began exhibiting serious behavior problems, including cannabis addiction, and was arrested for drug-related crimes, “along with charges of a sexual nature in relation with underage girls.” When an argument with Pablo in 2010 escalated, Stewart stated that he would “burn the house down” if Pablo didn’t leave. Sally-Ann pressed charges, and Stewart was arrested and ordered not to contact Sally-Ann or return to the house.

After this account, the book turns to the daily letters—220 pages worth— that he wrote to Sally-Ann over four-months. Addressing her often as “my darling,” they explain his devastation and plead for her forgiveness.

Stewart comes across as genuinely repentant and humbled. But ultimately, reading the letters feels like overhearing a private conversation you shouldn’t be privy to. And while the overall memoir is written in an easy-to-read style, it reads like a private journal, lacking any narrative craft to elevate it beyond this.

At book’s end, Stewart suggests ways readers can tell if their relationships are in trouble (“When you question your partner, are they evasive or dismissive?”) and how to approach divorce. The change in tone from the memoir part is disconcerting, although readers may find some suggestions useful.

Due to the issues mentioned, Stewart’s memoir isn’t likely to attract general readers. It may, however, be interesting to those embroiled in similar situations.