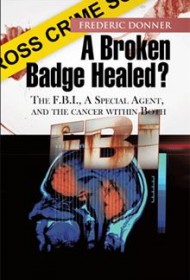 A Broken Badge Healed? is a curious hybrid of medical memoir and prescriptive critique in which a retired FBI Special Agent attempts to rehabilitate his former employer by using his own cancer as a metaphor for its ills. He succeeds more often than not with factual, persuasive writing, a solid grasp of his subject, and compelling anecdotes from his experiences fighting both cancer and crime.

Frederic Donner was investigating terrorist groups in Saudi Arabia when diagnosed with two malignant brain tumors. “Cancer is in some ways much like evil transformed into a disease,” he writes in the introduction. “I instructed my doctors to identify aggressive ways to fight my cancer, and they did. Now, I ask you to help me find ways to make the FBI heal.”

Donner weaves the metaphor loosely throughout the book as he delves into what he perceives as the FBI’s weaknesses: waste, bloat, complacency and mediocrity. Worst of all, in his view, is the post-911 overemphasis on terrorism. Not only does the FBI move too slowly to fight up-and-coming terrorist groups, Donner believes, but in trying to do so, the bureau is losing its edge in other criminal investigations.

Generally, the analogies between battling cancer and fighting crime are well handled, as when he contrasts the efficiency of the hospital where he was treated to the FBI’s bureaucratic inefficiency. At other times, the metaphor seems strained: “Many current employees feel lost and angry that the FBI is now ‘terrorism central,’” he writes. “Lost and angry is the same way many feel when diagnosed with cancer.”

Occasional glints of humor enliven his prose. For example, he writes that while not all “beauty queens and gorgeous bodybuilders…[m]ost agents… usually are not so physically heinous that they cannot get a date on New Year’s Eve.”

With a brief but thoughtful history of the FBI appended, A Broken Badge Healed? makes an informative addition to the libraries of law enforcement buffs.