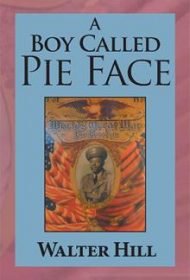 A Boy Called Pie Face looks at Depression- and WW II-era America from an African-American’s perspective, through the tale of Walter Lee.

Lee grew up in Mississippi in the 1920s, a frequent victim of the savagery of the Jim Crow South. Forced to quit school to help support his family, he became a bootlegger, left home as a teen to escape rednecks who wanted to kill him, and rode the rails for years. Hill – nicknamed “Pie Face” as a kid – spent time as a field hand, a hobo camp boxer, a soldier.

As such, Hill’s story has all the elements of a great read. Unfortunately, the narrative never realizes its potential.

Early on, it’s unclear if the book is nonfiction or fact-based fiction, autobiography or biography. It’s heavy on dialogue, with many conversations set more than 80 years ago; one wonders about the source. Readers only learn that Walter was Hill’s father in the final pages. A series of uncaptioned photos follows – a few, presumably, of Walter, the rest mysteries.

Hill’s writing can be entertaining, such as when he describes two local boys, nicknamed Chipmunk and Squirrel: “Their names were appropriate because one looked like a squirrel and the other a chipmunk… and both had as much brains as their names suggested.” But more often the story falters, with many significant occurrences given short shrift and unimportant moments detailed at length. For example, Walter’s marriage is mentioned only in passing, but more than a chapter is devoted to a young girl who escaped from a brothel with Walter’s help.

The memoir also takes an awkward, sharp turn into X-rated territory in the closing chapters. Serving overseas during WWII, Walter has sexual adventures that are detailed in explicit, overwrought language (“Nancy slowly opened her legs, inserting his love tool into her love nest and grinding up and down”).

Revisions would greatly benefit general readers. As is, the story is most likely to interest Hill’s family.