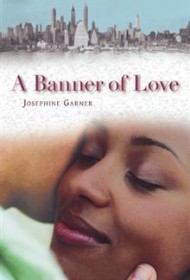 In an age where same-sex marriage has gained approval, or at least tolerance, the condemning looks and comments towards those in a mixed-race marriage may seem difficult to comprehend. Yet Josephine Garner successfully transports readers to the 1950s when such relationships were against the law in many states.

Newlyweds Esther and Taylor Payne move to Greenwich Village, a place more accepting of the bi-racial couple than the residents of Esther’s rural Texas home in McConnell County. Still, Esther feels she constantly has to do more and do it better than her white counterparts: “…[I] had gleaned enough citified social graces to conceal my humble country upbringing, and my speech was always impeccably the king’s English.”

Nonetheless, she and her husband find happiness in the city. With the exception of the occasional rude remark or sneer, as far as Esther is concerned the only shadow on her life is that she has never met Taylor’s family. Most of the narrative revolves around this point. She wants little more than to at least meet Taylor’s sister; however, he is mysteriously reticent in his opposition.

Garner offers vivid descriptions of life in the mid-1950s, referencing telling details such as fruit cup appetizers, scoop necklines, Life magazine and I Love Lucy, and skillfully portraying the confining nature of women’s roles back then. While Esther, who was once Taylor’s housekeeper, no longer wears a maid’s uniform, she still does his cleaning and cooking and washes the dishes after dinner while he retires to the study.

Although faith is an integral part of Esther’s character, Taylor takes religion in stride, and readers will find their differences as fascinating as their similarities.

A Banner of Love is a sequel to Garner’s Solomon’s Blues, which likely provides more details on Esther’s Columbia University education, her return to McConnell County, and how the couple’s bond is forged. These warrant mere mention here since A Banner of Love stands squarely on its own merit.