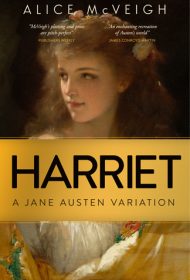 In Harriet: A Jane Austen Variation, Alice McVeigh reimagines Jane Austen’s Emma through the eyes of two of its characters, Harriet Smith and Jane Fairfax.

Harriet Smith, a 17-year-old orphan of uncertain parentage, is delighted when rich Miss Emma Woodhouse of Hartfield takes her under her wing. This Harriet, far from the naïve ingenue Emma takes her for in Austen’s telling, is determined to maximize her opportunity to escape Mrs Goddard’s boarding school and marry well. McVeigh also develops Jane Fairfax’s story, expanding on her character, her background, and the ups and downs of her liaison with Mr. Frank Churchill, before and during her time in Highbury.

Both characters are well developed in separate first-person narratives. Harriet’s voice is particularly well wrought. Her observations are humorous, and it’s a pleasure to revisit this familiar story though a different lens. She is, for example, far less deceived by Mr. Elton than Emma, and McVeigh exploits every opportunity for dramatic irony offered by Harriet’s secret sharp wit as she gradually discovers what really matters to her in life.

The challenges faced by young women without independent means in the 18th century are explored in both storylines. Jane Fairfax’s dependence on others exposes her to dangers, and through this McVeigh brings new depth to the original story. Despite the book’s title, Jane’s story is of equal importance to Harriet’s.

Fans of Emma will find all their favorite characters here and enjoy nuggets of familiar dialogue, as well as references to other Austen novels, including Mansfield Park and, to a lesser degree, Pride and Prejudice. Only Mr. Knightley’s character is reimagined in a manner that may not please everyone. Additionally, overuse of parenthesis and ellipsis distracts from the narrative.

Still, McVeigh never introduces any plot or storyline that contradicts Austen’s original, and in tone and language she successfully recreates this familiar part of Jane Austen’s world. Readers will find Harriet: A Jane Austen Variation an enjoyable, intelligent, reimagining of a well-loved story.