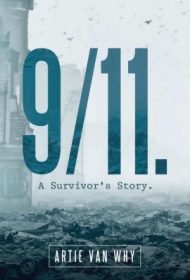 On September 11, 2001, Artie Van Why was among thousands who witnessed the horrific terrorist attack on New York City’s World Trade Center. This emotional memoir details his life before “that day in September” and his subsequent struggle as a reluctant member of what he terms the “Forgotten Majority”—the innocent bystanders in the street that morning.

Van Why believes readers should know who he was before 9/11 to understand who he became afterwards. He begins with his high school and college years, when he struggled with his sexual orientation, praying that God would “fix” him. An aspiring actor, Van Why moved from Pennsylvania to New York City, searching for a like-minded community. There, he took a job as a word processor, working across the street from the Twin Towers.

The author describes his horror and disbelief as he watched victims plummet to their deaths. The retelling of his experience is brief, but powerful and riveting. The book’s remainder chronicles his daily struggle with crippling PTSD, survivor’s guilt and spirituality, while the final pages compile blogs the author published in The Huffington Post.

Van Why’s narrative is divided into 47 short chapters, some a page long. Rather than defining the story, the format becomes a distraction, stopping and starting the narrative too frequently. The blogs seem disconnected from the rest of the book and repeat previous themes.

The narrative is permeated with the author’s existential angst, not only over his 9/11-related experiences, but other trials as well, including struggles with alcoholism, his parents’ deaths, even worry that his service dog will die someday. While his ability to remain deeply vulnerable is laudable, the litany of troubles becomes wearying. One wishes he could celebrate what’s positive in his life, rather than remaining mired in what he calls his “interminable sadness.”

Survivors of 9/11 or PTSD sufferers may relate to Van Why’s narrative. General readers, however, will find themselves longing for some sense of uplift or redemption to bring greater satisfaction to these pages.