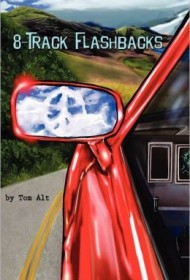 Those oldies stations that proclaim their music “the soundtrack of your life” are just shoveling the usual radio hype. But for Tom Alt, the music of his youth, the music of the tumultuous ’60s, is not only on his ipod, but in his soul. It formed him just as much as family, friends or teachers.

8-Track Flashbacks is a collection of stories — “basically true,” he tells us, admitting to a little embellishment here and there — that travels through the 1960s with Alt as our guide and the music of the era as our guideposts.

He takes us back to his formative years in small town Menomonee, Wis., devoting one chapter to each year from 1960 to ’69. Each chapter relates to a song that hit No. 1 that year, from Elvis’ It’s Now Or Never in 1960 to the Stones’ Honky Tonk Woman in 1969. The chapter on 1966, for example, is called “I’ll Be There,” a reference not only to the Four Tops’ hit but also to Miss Kemmeter, his senior honors English teacher who encouraged him and who remains one of the great influences in his life. High school misadventures. Dating disasters. Troubles at home. Procuring that illicit case of Old Milwaukee. (Hey, it was only $2.59.) Embellished or not, his stories ring true.

This book is an easy, enjoyable read. Alt’s writing style is smooth, at times funny, at times serious and reflective. He takes events, whether something as light as the shenanigans at a senior party or as painful as a dreadful family Thanksgiving dinner just days after his father walked out on the family, and gets to the heart of things.

The back cover notes that Alt is currently working on a piece of fiction built around the University of Wisconsin campus bombing in 1970. Based on Flashbacks, it’s something to look forward to.