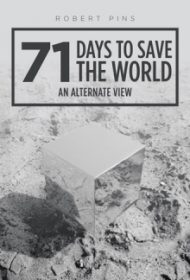 In this novel that blends fact and fiction, British citizen Robert chronicles his growing dismay over the election of Donald Trump in a series of emails to his friend and neighbor Neville.

As Robert begins his messages, Trump has just been elected and Robert begins counting down the days to the inauguration. He believes it may herald the end of the world, and decides to build a bunker big enough for his and Neville’s family.

In his correspondence to Neville, he considers the practical matters of living underground, such as how much food and water they’ll need, how they’ll pass the time, and what to put in the first aid kit. But his notes also reflect his thoughts on Brexit, and more so, how Trump became president and what that says about the U.S. — or as he calls it in one passage, “… the Disunited States of America.”

Meanwhile, Neville, whose responses are rarely included, is in trouble  “… for studying the ladies underwear section while at work,” and Robert seems to be spending his way into financial doom.

The author’s knowledge of politics and history provides the foundation for an intelligently written book. At times, humorous, other times angry, this is the narrative of a man trying to make sense of the world and what he sees as its inevitable end. “There is no higher purpose nor any control mechanism that we can invent that is beyond the corruption of our species,” Robert posits. The pacing is varied with just enough practical information to balance the political musings.

Robert’s intelligence can also be his downfall, however, casting him at times in an arrogant light that may be offputting to some. And it’s difficult to know Neville since he’s so rarely represented. While there are some spelling/typographical errors, they are easy to overlook.

This is certainly not a book for Trump supporters. But thinking readers who share Robert’s political leanings should enjoy his provocative ruminations.