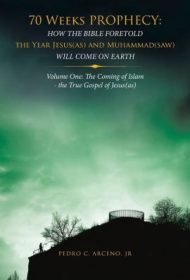 Scholar James Alan Montgomery once quipped that the Prophecy of Seventy Weeks—a foretelling given by the angel Gabriel to Old Testament prophet Daniel—was the dismal swamp of biblical exegesis. In 70 Weeks Prophecy, Pedro C. Arceno, Jr. looks to drain that quagmire by rigorously exploring such religious texts as the hotly debated apocryphal work Gospel of Barnabas (GOB) for answers to theological questions concerning the “imminent coming of God’s kingdom.”

For Arceno, GOB offers an important key to understanding the true identity of the “Son of Man,” a mysterious phrase used by Jesus in the Gospels. Most biblical scholars see the Son of Man as Jesus himself. But Arceno argues that Jesus, while important, was only a forerunner. The true Son of Man is the Prophet Muhammad, the “Messiah Most Holy.”

Arceno explores numerous topics aiming to demonstrate the role of Muhammed as the fulfillment of Daniel’s prophecies, including: the different roles of Jesus and Muhammed as messianic figures; the Abrahamic Covenant and respective role of Isaac and Ishmael; Muhammad as a member of the priestly line of Melchizedek; manipulation of the Bible by Pauline authors; and the idea that Jesus (oddly, the author calls him “Jesus(as)” and dubs the Prophet Muhammed as “Muhammed(saw)”) will return to become the leader of the Jews, inviting them to Islam.

While lively and well-researched, with numerous footnotes and citations, the narrative is incredibly dense. Readers without solid knowledge of Islam or Judeo/Christian prophetic literature will likely feel lost among numerous references to the Quran and Old and New Testaments. Frequent awkward and confusing sentences make an opaque topic even harder to discern (e.g. “Like for example, God intends to let Jesus(as) born without a father so that he cannot be called Son of Man for us not to confuse him with Prophet Muhammad(saw) who is the real Son of Man…”).

In all, this is a provocative tome but needs substantial editing to extract Arceno’s ideas from marshy writing.