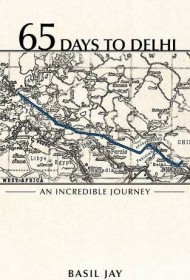 In September, 1974, a 32-year-old British land surveyor piled his wife and the couple’s three small children into a decrepit van they called Lulu and motored off to India. En route, the family ate lots of local bread and cheese, convoyed with assorted English-speaking fellow travelers and warred with the mysteries of car repair. They were, the author reports, held up at gunpoint by Pashtun bandits in the Khyber Pass. They witnessed the ritual stoning of a Muslim girl accused of adultery in Ghazni. The Englishman was even briefly jailed by Afghan police on a false murder charge.

Sound exciting? Alas, not very. Basil Jay has here combined his old travel diary with some latter-day reflections on the trip, and the result is a surprisingly flat, repetitious recounting in sore need of editing, in which the author frequently comes off as short-sighted, unadventurous and misogynistic. He leers at “a micro blonde with macro tendencies in other parts of her anatomy.” In Yugoslavia, he sniffs at the “peasant stock” and twice mocks the “chunky country girls.” And he grouses about the failure of foreigners almost everywhere to understand his shouted English.

While the narrative picks up some steam when real trouble with the natives begins, that quickly dissipates. Ultimately, readers who love travel stories will be better served sticking with travel writers such as Bruce Chatwin, Paul Theroux or Graham Greene.