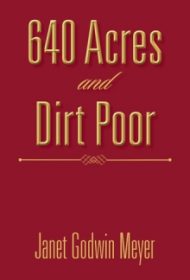 Janet Godwin Meyer’s 640 Acres and Dirt Poor details several generations in the lives of two families. While the book has no introduction or foreword to explain its purpose, it appears to be nonfiction, rather than a fact-based novel.

The story begins in 1915, with 67-year-old Hugh Godwin, a poor famer in rural Georgia, deeply grieving the recent death of his wife of 28 years, the mother of his 14 children. His stories, presented as being told to son Shug, sketch the histories of the Godwin and neighboring Owens families, from whom the author descends (her mother was a Godwin; her father, an Owens).

By page 80, Hugh has died, and Shug has taken over the book’s narration. He is later replaced by his daughter—and presumably the author—8-year-old Janet. Together, they relate the lives of the families from the late 1800s to mid-1960s.

While the material holds promise, the story falters under the weight of several issues. The three narrators generally speak/write in the same voice, with the same idiosyncrasies. And while at times, Meyer is meticulous with unnecessary detail (taking several pages to describe how laundry gets done, for example), often important events, such as the deaths of central characters, are dispatched in a few sentences.

Also confounding is the unfocused writing style, with many long run-on sentences. (“Vesta had her own jalopy for now it was a necessity because the school bus didn’t come along our road and every school day morning Vesta drove Carroll to second grade and Joan to first grade, Vesta sewed for three little children, and she had no choice but to do a little sewing every single day, and that was a time when all the commodities were rationed….”).

Finally, stories swing between past and present tenses, and the prose is replete with misspellings and misused words and expressions (“heard the cattle”; “right of passage,” “it’s for “its” etc.).

With better organization and editing, 640 Acres could appeal to a general readership. But as it stands, it’s a challenging read likely to interest mostly family and friends.