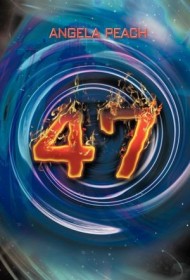 Angela Peach’s, 47, is a short science fiction novel revolving around a spaceship captain on a mission to find another viable world for Earth’s inhabitants.

In pursuit of this world, Lilith Madison and her crew go through a wormhole that opens only once every four years. On the other side, they discover an Earth-like planet where some of the crew members contract a deadly illness. In the years remaining, before they can go back through the wormhole and report to Earth, Lilith and her crew spend their time trying to find a cure for the disease.

In the meantime, Lilith conducts affairs with two of her crew members, John and Maggie. While these torrid affairs are progressing, something else is also taking course. An invisible murderer is picking off Lilith’s crew, a murderer that Lilith seems powerless to stop.

While this plot would seem strong enough to carry the novel, it ultimately fails because none of the characters have enough development to snag our attention. Only the three characters in the love triangle have substance, and what we know of them is precariously based on their feelings for one another. The other characters are completely flat. There is also a problematic dearth of description in the novel. What, for instance, is it like to go through a wormhole? What, in detail, does the replacement Earth look like? The reader wants to know.

A novel works only if we believe in it. If its narrative lacks integrity, if its characters are shallow, or if the world in which it takes place is only partially realized, we lose interest in it. This is especially true for science fiction, which requires a wholeness of vision to achieve credibility. Weighing in at a scant 115 pages, Peach’s novel is simply too short and rushed to provide the reader with a believable story.