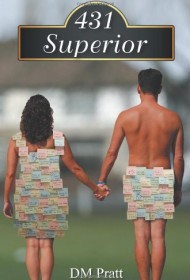 Lucy and Nate Fair are divorcees, with six daughters between them, who have recently married. Panicked about their rapidly approaching 50th birthdays, they decide to spice up their lives with a visit to the sex clubs of Las Vegas. After seeing too many dirty, perverted and just plain unsocial facilities, Lucy starts envisioning the type of club she would open in her Michigan suburb.

The author puts a lot of imagination into the sex club, portraying it as entertaining rather than disgusting. Lucy and Nate are fun and enthusiastic characters, which keeps the “perv” factor low, and the sex scenes are numerous and graphic, while still remaining tasteful and fairly vanilla.

But eventually, the porn-suburbia marriage becomes problematic. The first two-thirds of the book effectively juxtaposes dozens of sex scenes with Nate and Lucy’s everyday lives of dance classes and school runs. But the last part gets too caught up in a subplot, and the sex seems to dwindle. The humor also is hit or miss; Nate and Lucy’s giggles whenever the word “come” is mentioned rapidly become tedious.

Despite these problems, 431 Superior is a fun and spicy read that will most likely appeal to middle-aged moms looking for a bit of naughty but harmless escapism.