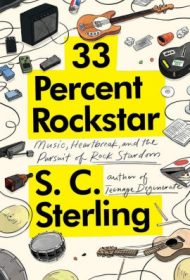 Scott Sterling’s 33 Percent Rockstar tells the familiar story of a young musician who dreams of becoming a rock star, playing to sell-out crowds and making buckets of money.

As the book starts, Sterling can’t even play an instrument. He gives up on guitar and picks up bass at the insistence of his drummer friend Jake, who teaches him how to keep time. Sterling steadily improves, and eventually he and Jake join a Denver band that plays dive bars, graduating to small theaters. A band Sterling later joins even plays the national Warped Tour—except they perform at the entrance as audiences file onto festival grounds. Throughout, Sterling and his bandmates drive tired vans. And drink. A lot.

The author’s self-deprecating storytelling charm is immediately evident in the beginning scene in which Sterling’s band prepares to open a 2004 punk show headlined by Agent Orange and the Misfits at a small venue near Denver. With stardom in his sights, he describes getting goosebumps as the lights go down and the crowd cheers—then waking up with a massive hangover and crushing self-doubt the next morning. “’Fuck, I am pathetic,’ I said as I crawled out of bed.”

During his rockstar journey, Sterling experiences adventures music fans will recognize. His descriptions of bars and clubs aptly recall the grueling grind of a band’s reality. Describing one club’s basement “backstage” area, he notes the undistinguished décor, including couches that “were worn and saggy and emitted a foul odor of beer and cigarettes” and a refrigerator that, on special occasions, contained “turkey and ham sandwiches.” Sterling also writes unflinchingly about failed romantic relationships.

The book is an entertaining, honest look at the trials and tribulations most musicians endure — and still fail to attain their dreams. Yet it also illustrates why the dream remains alive. As Sterling notes with hard-earned wisdom: “Giving up on a dream is hard, but realizing when it is time to give up is harder.”