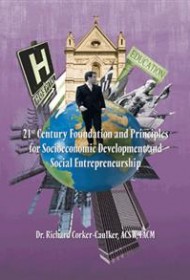 Dr. Richard Corker-Caulker believes that many American Evangelical Protestant churches perceive that their proper role is to focus on the spiritual, rather than socioeconomic needs of their poorer congregations. The author seeks instead to make a case for the use of church resources to enhance the well-being and economic prospects of church members.

Before the advent of Social Security and similar programs, the author observes, churches were the primary avenues for assistance to the poor. As government programs increased, Americans grew to assume that helping the poor was the responsibility of government agencies using tax dollars, not church congregations using church dollars. In addition, the author argues, the traditional Western philosophical divide between body and soul resulted in theological ideals that prioritize the saving of souls.

Nevertheless, in a survey of Detroit church leaders of poor congregations, Corker-Caulker was gratified to find that the majority of the responding ministers are already assisting their church members in material ways. He proposes that a theological foundation for such assistance can be found in the “Book of Genesis”: by recognizing their self-worth as individuals created in the image and likeness of God with divinely granted dominion over the earth, the poor can find their way to better circumstances.

Corker-Caulker wrote this slim book (at least in part), to meet a research requirement toward a doctorate in ministry. Despite its very positive message, the book has not been sufficiently reshaped for a general audience. It feels repetitive and padded in some spots, underwritten in others. One senses that Corker-Caulker’s book contains a significantly shorter (and interesting) magazine article within its pages. In its present form, however, the book is unlikely to appeal to a wide readership.