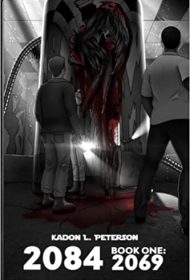 Kadon L. Peterson’s dystopian novel, the first in a planned trilogy, follows Dune Burnswick through a world in which an authoritarian government is trying to stamp out humanity.

Dune is one of relatively few naturally born humans (Nats) left in society. The governing World Peace Authority (WPA), claiming to promote social harmony, has set a deadline of 2070 for all Nats to be modified to resemble the synthetic humans among them.

Already not much of a follower, Dune becomes a full-on rebel against the WPA after witnessing a lemming-like mass suicide. He joins a revolutionary group, eventually taking their delinquent young people under his wing. Joining him is his common-law wife, Fennec, a Nat who had surgery to make herself look like a fox when she was young. As the regime begins to crumble, Dune and Fennec fight for their lives in a suspenseful climax that ends on a cliffhanger.

2069 fits squarely among the concepts of Aldous Huxley, Ayn Rand and George Orwell, imagining a future in which humans are robbed of their individuality. Peterson’s transhumanist spin is timely given the present controversies surrounding AI and other technology.

Peterson doesn’t shy from his protagonist’s unlikeable side. Dune can be ruthless, hypersexual and bullying. Although these traits will likely bother some readers, they speak to the harsh world in which he lives. Meanwhile, Fennec begins as mostly a fantasy object (albeit a strange one), which likewise might be off-putting to some. But her character grows and deepens as the story progresses.

The novel brims with philosophical musings. Overall, these lend the book an intellectual flair often absent from post-apocalyptic thrillers. But sometimes the digressions threaten to overwhelm the story. Paring them back, especially in the book’s second half, would better maintain its momentum.

More consistent pacing would help the novel appeal to a wider audience. Still, this is an intriguing story that will leave readers curious about where its sequels lead.