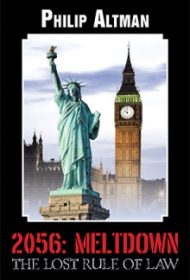 The message of this futuristic novel, according to its narrator, is to look into the future, “to point the way forward to reversing the downward spiral of insidious bribery, corruption, and loss of the concept of justice for all by imposing, by force if necessary, a single, federal-type of legal system across all countries,” supported by a single currency.

The year is 2056. Elections are fixed. Kleptocracy and bribery rule. “Nuclear weapons, stringent border controls, heavy tariffs, coercion, gangsterism, corruption, and murder are rife.” Senior UK Supreme Court Judge Henry Jordan persuades the UK prime minister and US president to act. Of course, those who profit from this situation vigorously resist. Jordan and other emissaries are subjected to James Bond-style perils—and escapes—in their missions to various (unnamed) countries across the globe to change the world and install a new, world-wide legal and monetary system.
This is a promising premise, and the novel is a quick read. Unfortunately, the story suffers several drawbacks. The tale is presented by a narrator who sees and knows everything, including what each of the characters is thinking and feeling. While this enhances the sense of objective reliability of the plot, it also creates distance between the audience and the story and reduces readers’ ability to identify with the characters.

Additionally, frequent interpolation by the narrator creates a surreal, almost comedic sense as the story’s heroes and heroines tumble into one peril after another and manage to extract themselves, to narrator comments like: “Well, what a lucky escape for all of them and a dire warning that security checks must always be carried out…” or “We can see that he would promise anything to suit his own plans!” This, plus stilted dialogue and reference to women characters as “the girls” lends the story a dated feel.

The result is a narrative that “tells” rather than “shows,” leaving readers feeling like bystanders rather than participants absorbed in the reading experience.