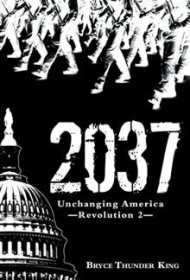 This dark science fiction novel offers one possible version of America in 2037, a time when excessive government control stifles everything in its citizenry except the will to live. The fourth thriller in a series, this book focuses on the experiences of Colonel Charlie Logan.

Told mostly through flashbacks about ten years earlier using a Thought Analyzer attached to Charlie’s forehead, the story reveals his experiences to young rebels who visit him at the Aging Population Housing compound. His memories include meeting barbaric freedom fighter General Jamie Page (a stalwart of the series), burning homes and churches in Boston during a race war, and marching to Washington, D.C. with a violent army of rebels, killing all politicians and government workers they encounter. Occasionally, he leaves the underground army to take odd jobs at restaurants and a chicken farm.

As Charlie’s memories reveal, the U.S. government can no longer support its citizens and gives California and Oregon to China, and Florida and Louisiana to Japan. These actions spur violence among the populace, and freedom fighters react to America’s financial problems by attempting to take over the government and kill millions of people to reduce the population.

Articulate and organized, though occasionally repetitive, this book emphasizes militaristic action with numerous graphic scenes of violence, including slit throats and genital mutilation. (An example: “I jerked quickly to see many men thrown backward as .50-caliber rounds crashed through their bodies. Skin and yellowish liquid spewed through the air…I looked up, aimed my revolver at the bottom of the crotch of the man, and fired three quick rounds….”) This might turn off some readers. And while 2037 keeps the pages turning, the story is mostly action-oriented and fails to delve into the characters’ emotions. Thus, it’s hard to care about any of the players very deeply.

Nonetheless, the novel will appeal to readers who prefer action over character depth, as well as those who enjoyed previous installments of the series.