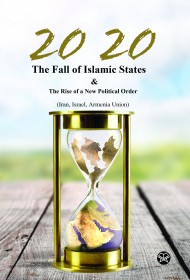 Sohrab Chamanara, a prolific author on the subject of Middle East history, now offers a book attempting to survey nothing less than the entire history of the Middle East over the past 2600 years. Presented in a textbook-style narrative, without citations or bibliography, his book owes a great deal to information easily found on Wikipedia.

While Chamanara omits little in his telling of the story of the Middle East (with an emphasis on Iranian history, the subject of several of his previous books), his workmanlike approach breaks little new ground. The book is replete with typographical errors (for example, he introduces his appendixes as being “mostly coppies [sic] from Wikipedia”), the maps are often poorly reproduced, and an index would have been helpful.

However, Chamanara’s relatively brief prologue deserves attention. In it, he states his fervent hope that Iran, Armenia, and Israel—three cultures more inclined toward conflict than cooperation —will, by the year 2020 (a year the author admits is an arbitrary choice), join together into a “New Political Order.”

Chamanara argues that this can happen only with the direct intervention of the United States, which he hopes will, before the 2016 election, place sanctions on the Iranian leadership, thus provoking a revolution that will force a new constitution to be written in Iran, Israel, and Armenia, allowing this union to form. Chamanara offers little factual underpinning for this argument, a scenario that seems politically unrealistic as presented here. (Chamanara proposes that the U.S. sanctions that would set the revolution in motion be written so that they would have to be renewed by future presidents, apparently unaware that this is, by stature and American case-law, unconstitutional).

Nevertheless, utopian visions by passionate authors will always have a place, if only to begin the argument. While the main body of Chamanara’s text can easily be replaced by other, better researched and presented histories of the area, his provocative prologue deserves a reading.