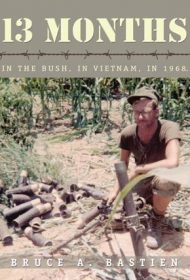 In 13 Months, Bruce Bastien engagingly recounts his service as an infantry Marine in Vietnam during 1968.

Aimless and looking “to do something constructive,” Bastien entered a recruiting station in Minneapolis in 1967 and was signed up by a persuasive sergeant “in about fifteen minutes, maybe thirty minutes tops.” His book is divided into chapters named after the various missions he subsequently endured, such as “Operation Mameluke Thrust,” or after locations, such as “Lang Co” and “Phu Bai.”

At the start, he offers a brief account of his unit, Kilo 3/5, “tramping to Go Noi Island to replace another embattled battalion.” The heat and his 70-pound backpack become so unbearable that Bastien envisions his arms being sliced off by the shoulder straps and falling to the ground.

Similar vivid descriptions of settings and emotions continue throughout. When another soldier “two or three guys ahead of me” is killed in action during Operation Allen Brook, he notes that he “suddenly got mad” at the dead man. “He was going home, and I was not.” Describing defending “The Old French Fort” in the mountains, he supplements his own memories with a friend’s recollections, as he often does throughout the narrative: “The lighters came out, the cigarettes were fired up, and everyone began to burn leeches,” writes the friend. “Then came the howl. One of the men had found a leech on his pecker.”

Bastien is sympathetic, authentic and admirably candid throughout. In the end, he questions the morality of America’s involvement, although he remains proud of his service.

The book missteps with its organization, as the narrative immerses readers in the action in the first four chapters, only to jarringly regress to the author’s recruitment and arrival in Vietnam in chapters 5 and 6. Additionally, some repetition could have been remedied by a proofreader.

Nonetheless, Bastien provides an engrossing, well-written narrative that brings the gritty everyday experience of American soldiers in Vietnam to life on the page.