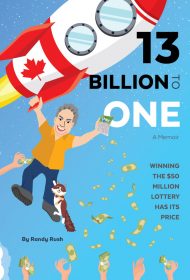 Randy Rush’s life was turned upside-down when he won $50 million, tax free, in Canada’s Lotto Max drawing. In this memoir, he details the sky-high euphoria and suffocating misery that followed, the lessons he learned about people, and how he finally found peace and satisfaction.

Rush’s journey began on a frigid January day in 2015 when he ran to his corner grocery in Lamont, Alberta, to buy food for his 27-pound cat, Conway Kitty. Heading out the door, he grabbed a pile of old lottery tickets that he hadn’t bothered to check—and soon learned he had hit the jackpot!

“I was a welfare kid who had grown up on the wrong side of the tracks,” he writes, “…so to suddenly be handed $50 million was impossible to wrap my brain around.”  He offered gifts of money, homes and vehicles to family and friends, and splurged on travel and a fleet of high-priced cars for himself.

Soon, though, the darker side of his fortune revealed itself. He was convinced by the son of a man he considered his best friend and mentor to invest nearly $5 million in a new software company. The money actually went largely to the scammer, his wife and his parents. After an extensive court fight, Rush recouped his assets, but between his high-octane lifestyle and the pressures of dealing with the con man, he had become a physical and mental wreck.

The book details these legal battles while smoothly weaving in other aspects of Rush’s life: his fractured family, employment history, and more. The story is nicely balanced, well organized, and crisply told, and the author is a sympathetic figure who finally seems to have found his purpose.

On a trip to Africa, he met representatives from a church group working to help children. He eventually bought land and a school bus for a high school in Uganda, and became a friend and benefactor to others similarly interested. He also founded a website to expose white collar criminals. Ultimately, Rush learned that making a difference is more important than “stuff.”

Readers will find 13 Billion to One a delightful read—one that also includes an invaluable cautionary tale about people and money.