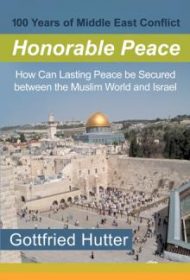 In this volume, Gottfried Hutter offers a faith-based solution to the Israel/Palestine conflict. The author, a psychotherapist who has studied Catholic theology, political science, history, and Sufism, bases his proposals for peace on “the underlying unity of all religions,” as all three Abrahamic religions, Hutter notes, recognize love and compassion as primary virtues.

Hutter’s book is comprised of essays, lectures, and reprinted articles published in such newspapers as the Times of Israel. As background for his proposals, he gives a synopsis of the history of Israel, emphasizing the importance of the Holy Mount. Hutter recommends that this Mount—where Jesus taught, Muslims have their holy Al Aqsa Mosque, and Jews wish to rebuild their ancient temple—be eventually shared between the three religions.

The solution to the conflict over the Mount and the land in and around Israel, he posits, is to promote the compassion mandated in the Bible and Koran. Because the umma or the “community of all Muslims” regards the Mount as a holy site and the Israel’s 1948 creation as a seizure of Muslim land, the umma must be consulted in any peace negotiations. Hutter recommends that the initiative be undertaken by a respected leader such as “King Abdullah II of Jordan.” The negotiations would start from a point of empathy—for the Jews who suffered pogroms and the Holocaust and the Palestinians who endured “over fifty years of occupation.”

Hutter skillfully grounds the Israeli/Palestinian conflict in its religious underpinnings, and his recommendations, though idealistic, are worth considering. His, book, however, is tediously repetitious. The author, for instance, mentions multiple times that Palestine claimed “there never was a Jewish temple in Jerusalem,” and that the Muslims historically ruled the Jews and other non-Muslims under a “Dhimmi contract” which provided for “interreligious peace.” In fact, so much repetitive material is combined with the new that Hutter would best eliminate the article format and create one integrated text.

While the author delivers interesting ideas, without revision, readers are unlikely to persevere through the entire book.