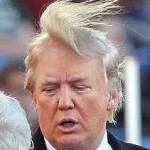 Donald Trump might be the most polarizing figure in American politics since King George raised the price of tea. But there’s one thing we can all agree on:  The man knows how to get publicity. Boatloads of it.

1. Be bold: Donald Trump knows how to think big. The man builds skyscrapers 45 stories high and plants his name on top for the entire world to see. This is not someone who walks timidly through his life — and neither should you. When it comes to publicizing your book, take a deep breath, straighten your spine, feel your own power and think big. Trump big.

2. Be genuine: Voters are flocking to Donald Trump because it’s clear that he isn’t putting on an act. He is 100% Donald Trump 100% of the time. When promoting your book, you will connect with readers, not by affecting some intellectual or authoritative persona you feel an author should have, but by being yourself. Allow the real you to emerge, personality quirks and all. Readers will relate to your authenticity.

3. Make some noise: Ok, so maybe you’re not going to attract attention by calling Jeb Bush “dumb as a rock” or by telling Carly Fiorina she has a face no voter could love. And to be honest, we don’t suggest that you do (Trump may be the only person in America who can get away with such outlandish statements). The point here is that Donald Trump knows that to get publicity, you have to make yourself heard, and that means finding ways to separate yourself from the pack. Rather than firing off insults, think of ways your project is different from others. Ask yourself how you can distinguish it from similar titles. Then call attention to that difference in every way possible and at every opportunity.

4. Believe in yourself: Can you picture Donald Trump sitting around wondering if he’s doing the right thing? No, you cannot. “Show me someone without an ego,” he once wrote on his Facebook page, “and I’ll show you a loser—having a healthy ego, or high opinion of yourself, is a real positive in life!“ There’s no place for self-doubt when promoting your book—or for listening to the naysayers. Take a page out of Donald’s Trump’s book:  Countless comedians have attacked Trump’s hair, and despite all the barbs and outright nasty comments he receives, Donald Trump is still wearing the same hairstyle! In fact, he wears it as a badge of honor.

Our point? Own your project and don’t listen to those who would tell you you’re crazy, that no one is going to buy your book.  As Taylor Swift says: “Shake it off. Shake it off.”

And that’s a statement, we just realized, that could also apply to Donald Trump’s hair.